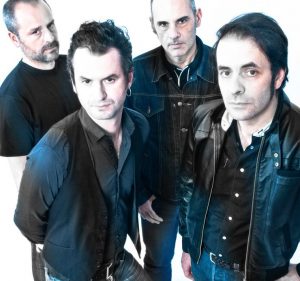 The group was formed in 2011, with Carlos Moura (drums), Sérgio Costa (voice) and Maurício MauMau (keyboards), joined by João Calheiros (bass). After several entrances and exits, the original fantastic quartet remains.
Bringing in the veins the primordial sounds of garage rock’n’roll, from the pioneers of the 50’s to the psychedelics of the 60’s to the uncompromising burst of the 70’s, Magnets make a seminal rock, true to the spirit of rebellion, nonconformism, partying and Rock’n’Roll energy.
During the eight years of existence, they have performed a lot, in various stages of this country, having been one of the most remarkable (for the members of the group) the opening concert for the renowned American band The BellRays.
Thee Magnets will step on the stage (not the grapes …) of simpesmente … Vinho, bringing with them the excitement, danger, sensuality and vitality of the rock ‘n’ roll spirit, so that after dionysian tasting of nectars, “going out” echoes on Friday night.